Ankylosing Spondylitis (AS) is a form of joint disease which leads to serious inflammation of spine along with sacroiliac (SI) joints. It mainly affects axial skeletal system, such as the ligaments and joints, knees and lowers back. It can also affect various other joints and internal organs of the body including the eyes, respiratory system, renal system, shoulder blades, knee joints, hips, cardiovascular system and legs. In simple terms, it causes a person’s spine to stiffen because of inflammation in the important joints. It can possibly result in a kyphotic deformity in the spine, a frontward curve of the spine.

A normal spine has the ability to move around in many directions making able to bend over, turn, and twist. The vertebral bones are bound by suspensors ligaments and are split up through cushiony discs that allow movements of joints and overall body. Movements become hard or even impossible in advanced Ankylosing Spondylitis as ligaments calcify as well as vertebral bones blend with each other.

The cause of Ankylosing Spondylitis is unfamiliar up till now, although a lot is known about how it advances and the reason why this causes stiffness of spine. In the beginning, an inflammatory reaction in the bone fragments develops across the edges of important joints. Inflammatory cells generate chemicals which harm the particular bone. This leads the bone to start dissolving and making it weak round the side of each and every joint. Destruction of the bone starts a procedure in which the body attempts to restore the injury with scar tissue formation making the bone less strong and sluggish. Once the inflammation starts to vanish, body tries to recover the bone fragments through creating calcium build up throughout the part of the injury. This calcium build up distribute towards the suspensory ligaments and discs between spinal vertebrae leading to a blend in the spine known as bony ankylosis.
Ankylosing Spondylitis is thrice more widespread of men compared to women. It is most commonly encountered in White males between Seventeen and Thirty-five. It seems to be hereditary, a particular gene HLA-B27 is contained in 80 to 90 % of affected individuals. 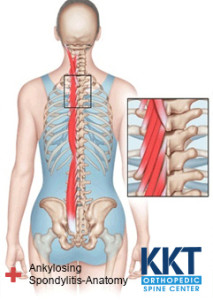 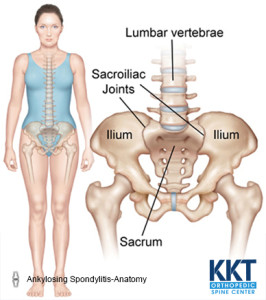 Canadian certified orthopedic surgeons at KKT will need a complete history, execute a detail physical evaluation and carry out 3D KKT Xrays. Canadian certified KKT orthopedic surgeons may possibly recommend X-rays of your spine and pelvis. The vertebral column of an affected individual gives a particular appearance on X rays labeled as bamboo spine. A blood examination is carried out to find out whether or not there is a HLA-B27 gene. If you possess the signs and symptoms of disease and also the HLA-B27 gene, Ankylosing Spondylitis is probably be the appropriate medical diagnosis. A blood examination also shows inflammation within the body. The exam used just for this is the Erythrocyte Sedimentation Rate (ESR). The urinalysis may be carried to check renal system complications of the disease.

It is usually managed by medications to decrease pain and inflammation. But these pain killer and anti inflammatory medications are found to cause numerous side effects and these unwanted side effects might be severe if these medicines are adopted for extended period of time. Surgical treatment is unusual in this case.

KKT treatment is found to be quite successful in managing the complications caused by Ankylosing Spondylitis and impedes the process of disease progression. KKT treatment is a gentle and effective approach to relieve pain and discomfort caused by without any side effects. KKT treatment enhances spinal column range of motion by realigning it into normal symmetrical position and helps with soreness management and protection against deformities caused by the disease. A well-rounded KKT treatment plan aids in soothing inflammation and pain, enhancing your ability to move, durability and flexibility, and assisting you to perform your everyday routines more easily and skillfully.